Information and Details from past LibreOffice Conferences

There are also small international airports in Ostrava (flights to Paris and London) and Pardubice (flights to Saint Petersburg and Moscow). Both have good train and bus connections to Brno. 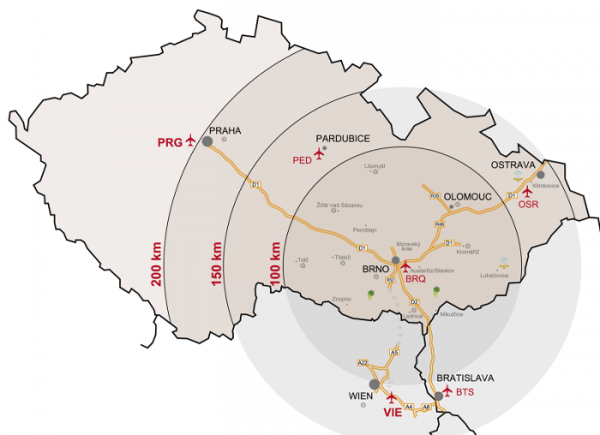 Brno has good train connections to several European cities and train is the fastest and most convenient means of transportation between big cities in the region. All intercity trains arrive and depart at the main station Brno hl. n., which is a hub of public transport in the city.

Brno is part of the European bus network and all connections and their prices are similar to trains. RegioJet and Eurolines provide buses to many european cities. Most Eurolines busses arrive at Brno-Zvonarka, Brno's main bus station. Student Agency buses arrive at a station opposite the Grand Hotel which next to the main train station.

Brno is well-connected to other cities by highway. You can get easily to neighboring countries by car. For using the Czech highways you have to purchase a highway sticker.  The 10 day sticker costs 350 CZK/13 € and can be purchased at every gas station. See Transport in the Czech Republic website for more infromation about driving regulations. Travel time examples:

Warning: there are many roads under reconstruction in and around Brno. Especially the D1 highway is under complete reconstruction. There are 5 areas on the highway between Prague and Brno where the traffic bandwith is limited and occasional traffic jams may occur. The traffic bandwith is very limited due to reconstruction also on D1 between Brno and Vyškov (direction to Ostrava and Poland) and traffic jams are very common there. Please adjust your travel time estimations accordingly and check for current traffic info (Czech only).

Privacy Policy (Datenschutzerklärung) | Impressum (Legal Info) | Statutes (non-binding English translation) - Satzung (binding German version) | Copyright information: Unless otherwise specified, all text and images on this website are licensed under the Creative Commons Attribution-Share Alike 3.0 License. This does not include the source code of LibreOffice, which is licensed under the Mozilla Public License v2.0.
"LibreOffice" and "The Document Foundation" are registered trademarks of their corresponding registered owners or are in actual use as trademarks in one or more countries. Their respective logos and icons are also subject to international copyright laws. Use thereof is explained in our trademark policy. LibreOffice was based on OpenOffice.org.